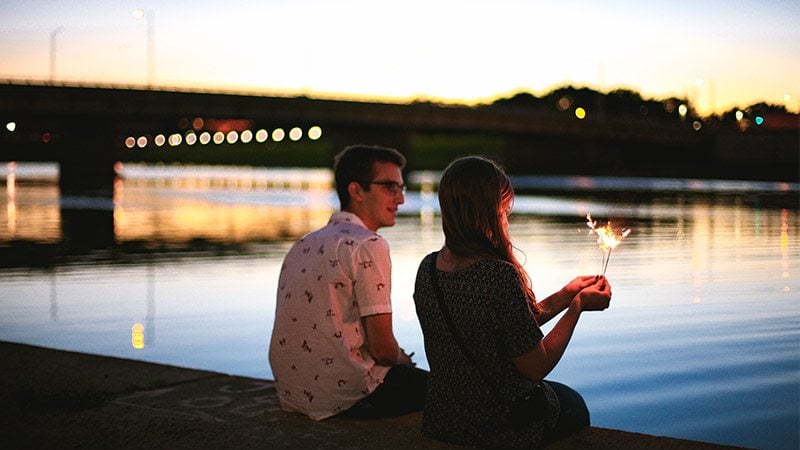 I just got back from the Back to the Bible Alaska Cruise. For me, the highlight came at Glacier Bay as our ship spent a few hours simply standing still in the bay and most on board crowded the top to view this spectacular scene. At first it looked like we were quite close to the glacier, but whenever a huge chunk of the glacier would fall into the ocean, we noticed that the sound would take about a second to arrive. Indeed, to my amazement, we were still some distance away.

It turns out that the glacier is about 1½ kilometers wide and has the height of a 40-story building. The glacier has an amazing story. In 1916 after 200 years, it had shrunk back by about 105 kilometers. Since then and up until now, it has been making an amazing rebound, growing and thickening dramatically each year. It is a part of the natural cycle that God placed into the natural world.

I had a “David experience” as I watched the glacier.Psalm 8 says, “What is man that You are mindful of him?” The words “O Lord, our Lord, how majestic is your name in all the earth” came to mind.

Even while we were away reveling in the splendor and beauty of the created order, we were made painfully aware of the riots in the United States following the shooting of two black men, and then the subsequent killing of five police officers. Now, we contemplate the events in Nice, France, and the deaths of over 80 people as radical Islamic terrorism has again left its bloody mark.

In this, I am left to contemplate a world created by God, and yet a world so subject to corruption. Paul’s words in Romans 8:22 come to mind: “For we know that the whole creation has been groaning together in the pains of childbirth until now.” Indeed, this superimposition of the remnants of the original creation’s beauty with the groaning and tears of a cursed creation is constantly before us.

But by using the phrase “pains of childbirth,” we are reminded that the groaning of this present life is not a death rattle, but a birth pain. Now as a man, I am not qualified to speak of the pains of childbirth, and I would not want to quantify the amount of pain a woman might experience at childbirth and compare it to the kinds of pains a person might feel at the point of death. But the point I want to make is that pain is not judged on the basis of its intensity, but on the basis of what it represents. If pain represents the giving birth to a child in the world, how can that pain be compared to the last dying breaths of a body wracked with cancer.

For Christians, the convulsing of this earth, even though inspired by sin and corruption, is never the reason for despair. We believe and know that our Lord Jesus will return, and that He will bring about a new heaven and a new earth. For those of us who have this hope, we also remember that the most lovely experience we might encounter in this life is but a faint whisper of that which is about to be revealed.

Of course, that doesn’t mean that we stop praying for the Lord’s graciousness to this troubled and convulsing world. But we also remember that in the darkest hours of human experience, we will never despair. Ours will be an experience of confidence and joy, even while we acknowledge that weeping may last for the night.